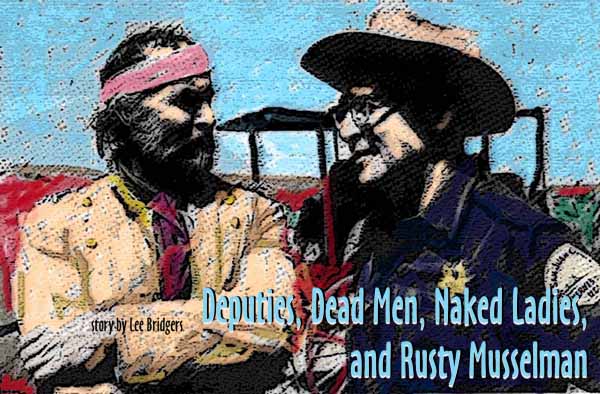 --a tribute to Canyonlands' most loveable relic--

The 12 bed San Juan County jail facility, built to contain the criminal element of 9000 square miles of southeastern Utah, was filled to well over capacity with drunken Indians still loudly celebrating some special event, when a white man and a black man both named Johnson arrived handcuffed together. To the incarcerated Navajos and Utes Johnson and Johnson must have been a special sighting, because they were pointing, laughing, and joking among themselves from the moment the two made their appearance.
In full view of his rowdy, captive audience Sheriff Rusty Musselman ceremoniously uncuffed black Johnson and began to uncuff white Johnson, but ran into trouble with the cuff on white Johnson's gloved hand. Rusty fumbled for several minutes with cuff and keys until white Johnson finally asked, "Do you need some help with that?"
"Yea, I do." Rusty replied.
White Johnson calmly unscrewed his hand from his wrist, and gave hand and offending cuffs to Rusty.
"The Indians went wild with laughter," says Rusty Musselman thirty years later.
Now in his eighties and recovering from heart surgery, Rusty sat in a comfortable armchair in the living room of his beautiful log home just outside of Monticello. Rusty generates a special feeling whenever he shares such a story--a real love for people, for all people and the wonderful absurdity of life. Bette Stanton, author and recently retired director of the Moab to Monument Valley Film Commission, once said of him, "Rusty is a western treasure and the most lovable joker in all of Canyonlands."
I mentioned my worry about placing the words, "drunk Indian" in this article. I knew that Rusty had a lot more "dangerous" (albeit truthful) things to say, and the stories were only going to get more "off-color" as time wore on and the whiskey kicked in. I knew I would have to give in to his humor and let the stories flow without censorship, but I thought of Jim Stiles and the letters he will probably get from airing Rusty's delightful oral freedoms.
"How about 'chemically challenged Native Americans'? Do you think that will fly?" I asked.
Rusty sat before me smiling with an Oxygen respirator plugged into his nose. He chuckled in that way that is uniquely Rusty. There was a cosmic gleam in his eye, the look of someone who knew the score, but never needed to follow the game. He replied, "I don't know where humor went. Quite a lot of the old folks had humor, even though they was a lot of shoot-em-up artists. Nowadays, people just stand there with their mouth open and you can't go nowhere with that."

All during our conversation Lilly had been by his side, supporting him, jogging his memory, smiling beautifully, stepping in at the right moments, but refusing to let me take her photograph. She said, "You've been at this for over three hours. Don't you think it's time to stop?"
Lilly was concerned with Rusty's health. I had him drinking whiskey and running all over the house dragging his oxygen tube through the dust. Old age is so unfair and it has never been more obvious than in the case of Rusty Musselman. His body is old, but he remains eternally young at heart and so innocently honest.
As I stood in the doorway Rusty spoke in a resolved tone, jiggling the oxygen nozzle dangling from his nose as if it were one of his props, "I don't know if I'm ever gonna recover from this, but I'd better try."