UNREGULATED MOTORIZED USE HAS DONE ITS PART TO DEGRADE MOAB AS A DESTINATION FOR MOUNTAIN BIKING AND HIKING.
On April 28, 2007 the owner of Dreamride was hit by a motorcycle while leading a skills clinic for a solo rider out of Courthouse Pasture. Over the past few years Moab has been heavily marketed by the local travel council (people who don't love our surroundings, only the money that is made by prostituting the beauty and wonder). The result has been an explosion in motorized use that makes the impact of unaware and unprepared mountain bikers look insignificant. Frankly, our business is changing to react to this influx of inconsiderate and unaware trail users, who think it is just fine to use motorized vehicles for recreation in the face of wars for oil. MILLIONS of people are dying in the rush and greed to supply us with fuel to simply toss away in frivilous pursuits like bashing a Hummer into our fragile desert environment with the windows rolled up. People who put a "Support the Troops" sticker on their Hummers should be shot on site! This is the very thing that makes America look so bad in the eyes of the world. Locally it has meant many deaths, mostly children--a horrible situation that is not reported by local media and concealed by the Chamber of Commerce and the Moab Travel Council so that they can entice you in and sell you a dirty hotel room and a crummy dinner. You don't need a drivers license, insurance or a registered vehicle to be an idiot in the lands around Moab. Even a baby is legally allowed to drive an ATV off-road. And the babies are getting squashed and killed. A young girl of 14 recently drove an ATV off of a 700' cliff. Whose fault is that? Her PARENTS! Motorized users are required to register with Parks Services, but that organization cannot enforce rules with a staff of one or two people to cover half of Utah. Click on BAD MOTORCYCLISTS for an example of contact with motorized users who are not exercising the cautions or courtesy mentioned below. Even the douchebags who work in local bike shops ride motorcycles, not bicycles! That 50 pound freeride bike will eventually be put aside for a motorcycle. The fellow who hit our company owner was a guide for Western Spirit, a local mountain bike tour company. This is why Dreamride's pool of guides is so small--we would never hire someone like that. If you want to avoid the hail of motors, don't come to Moab over the weekend in peak season! 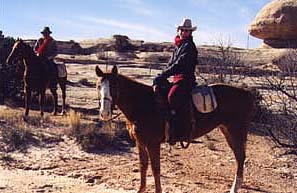 Share the trail with others and if they ask for help, give it to them. If you come across a person who is lost, let them ride with you. If someone asks to tag along, let them, if at all possible. Always help others in need, even if they don't appear to be in trouble. Dehydrated people can be very friendly, or so spaced that they just stand there, and are generally unaware of their own dangerous predicament. Don't be a selfish jerk. Share your water and food, if someone needs it. Be courteous and kind, if not for their sake, for your own peace of mind and spiritual well-being. If you see another biker ignorantly riding across cryptobiotic crust or throwing rocks into a canyon, try to correct them in as diplomatic a manner as possible. Remember why you are riding and try not to ruin someone else's day just because they are unaware, or just plain stupid. Enlighten them. If they refuse to be enlightened, then it is OK to use verbal abuse or a large rock before you get as far away from them as you can.

Slow your speed for hikers and dismount if you are on a tight trail. Give any living creature lots of warning as you approach. Do not sneak up on horses. Always dismount for horses coming from the opposite direction and, if you wish to pass an equestrian, horses will be much more comfortable if you are heard clearly as you approach. Don't leave bikes in the middle of the trail. Beware of blind turns, severe ledges, and drop-offs.

Believe it or not, four-wheelers and motocrossers are mostly very nice people and usually display more courtesy than fellow mountain bikers. Say "Hi" to them as you go around them. If you see a four-wheeler running amok in the desert, for what it's worth, they deserve the harshest treatment, but remember that because of our numbers, mountain bikers are just as much of an environmental problem and you will probably come across mountain bikers being just as stupid as those on motorized transport. Sadly, four-wheelers and motocrossers are our allies in maintaining access to the best trails on earth. Despite the fact that the mountain bike is human powered, we are lumped in with the motors. While this is indeed unfair, considering that we are self-powered, share the trail with good will while you work hard politically to be defined as human powered. Motors are not for wilderness!

KNOW FIRST AID AND CPR! TAKE A CLASS AT YOUR LOCAL RED CROSS.

copyright Dreamride 1997 None of the material, written, graphics, or photographs, may be broadcast, published, re-written, re-edited, or used in any way outside of this site without the written consent of Dreamride Mountain Bike Tours and Film Services and Lee Bridgers. Use of this site signifies agreement to terms of use.

Mountain Bike Vacations based from Moab, Utah.
Reading about safety and survival is a good thing. Ride with the most experience hardcore day ride provider in the Moab area. Our guide services greatly reduce risks and greatly enhance the experience. Dreamride is the most experienced hardcore day ride provider in Moab, offering mountain bike vacations for solos, couples and groups no larger than five. 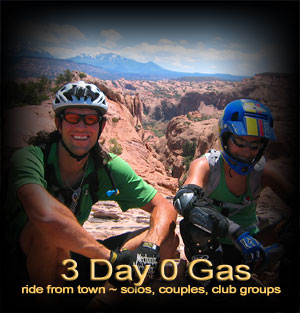 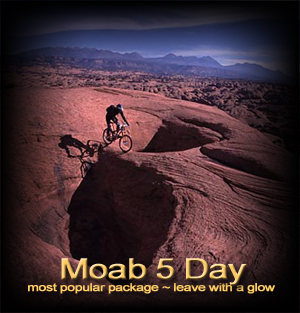 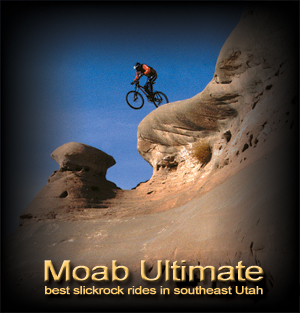 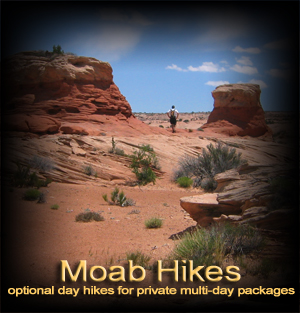